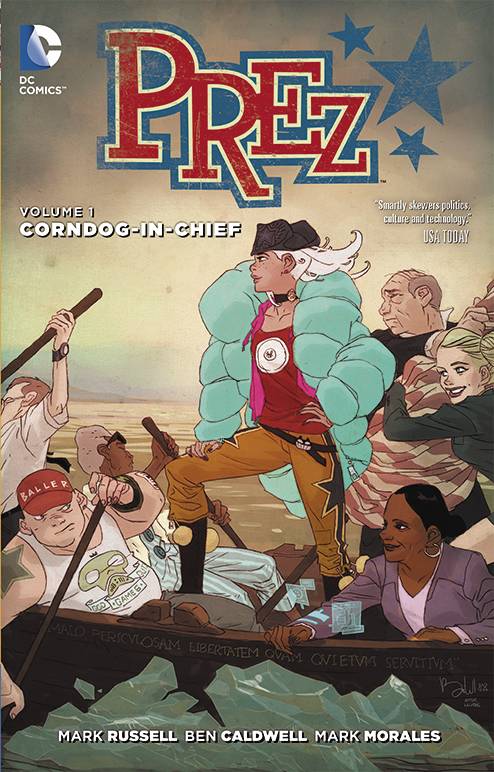 Meet Beth Ross, the first teenaged President of the United States. In a nation where corporations can run for office, the poor are used as human billboards, and tacos are delivered by drone, our only hope is this nineteen-year-old Twitter sensation. But the real question isn't whether she's ready for politics-it's whether politics is ready for her. Writer Mark Russell (God Is Disappointed in You) and artist Ben Caldwell (Star Wars: Clone Wars) take on a very unusual hero in these stories from PREZ #1-6, along with the Sneak Peek story from CONVERGENCE: BATGIRL #2.

Beth Ross’s plane is shot down and she is mistakenly attacked by American sentries.

Beth finds a temporary solution to the Cat Flu epidemic.

President Ross tours the world apologizing for America’s past and present transgressions. War Beast, a self-aware war robot, takes refuge in a church.

The Beast of War

Beth, with the help of Preston Rickard, begins to assemble her cabinet and advisers and is sworn into office.

After the presidential election fails in the Electoral College, the vote falls to the House of Representatives. Due to legislators withholding votes and switching votes to try to get more favors from the political bosses, Beth Ross ends up being accidentally voted in as President.

In a surprise turn of events, Beth Ross, known as the internet personality Corndog Girl wins the presidential election in Ohio, causing neither major party candidate from having enough votes in the Electoral College to win the election.