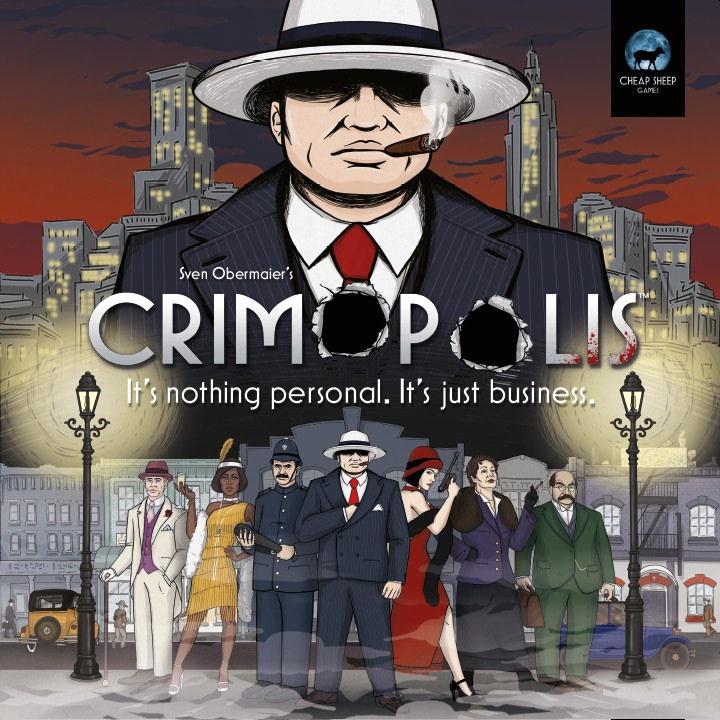 Set in 1926, you are an unsuccessful gangster in a petty town. Tired of doing small jobs that only earn stress and scars, you dream of putting the hype on big time. The rumble on the street is the big guys in the big cities are pulling the big dough, and you want to be the most prestigious of them all.

Crimopolis is a fast-paced strategy board game about bean-shooters, chippies, and sugar in a city where nothing counts but underground influence. Recruit criminals, explore the city, execute illicit jobs, ambush others and take over their assets. Grow your skills and abilities, so you can counteract when reporters and enemies get in the way.

Players explore a city area by moving gangsters further and further away from their headquarters. Tiles feature streets and city blocks with parks, banks, graveyards, churches, lakes, etc. Players assemble gangsters and execute jobs. The trickier the job the more prestige they earn. Taking over other players’ assets also gains prestige as well as end game contributions such as city influence, body count and hidden skills. The player with the most prestige wins.

Crimopolis is a mixture of a Eurogame featuring strategy with multiple winning paths and downplaying luck, and an Amerigame allowing for an immersive 1920s gangster theme with direct player conflict and highly intuitive rules. The game length can be freely adjusted: shorter games increase luck, longer games deepen gameplays. The recommended game length balances both and allows for family game nights with players of different ages.

Casual players learn the rules quickly. Hardcore players enjoy the depth of strategy that opens up after a few rounds of the game. There are four winning paths which can be freely chosen, mixed and changed throughout the game, requiring you to adjust your plans if other players have changed their strategies.