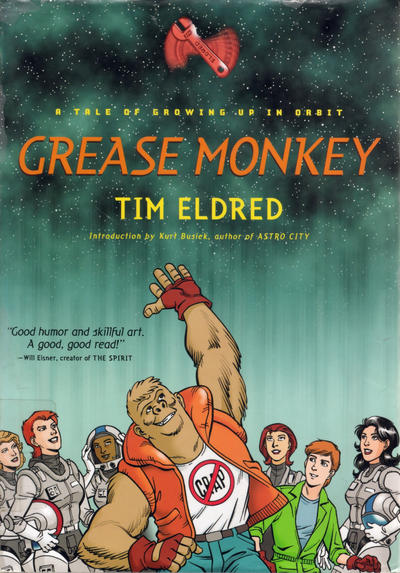 Robin eavesdrops on Mac’s beer night with fellow apes, and is troubled by their criticisms of humanity. Mac explains that it’s a relief valve, and encourages Robin to emulate the courage of Linnaeus — the first scientist who put apes and humans in the same family. Robin realizes that he already treats Mac as he would any of his other relatives, and an approving Mac assures him that he’s in.

End of the Tunnel

Everybody rags on Robin, leaving him exhausted and resentful. Mac takes him to an observation lounge, giving him privacy, music, a cushion, and a view of the stars. The following day, Robin is serene through the chaos.

Mac helps Robin see that the chaos in Robin’s life may have a message or purpose.

Mac and the admiral have another date while Robin joins Barbara and other squadron leaders to inspect a new bomber prototype. Robin and Barbara express reservations, leaving the young designer furious with Robin but smitten with Barbara. She agrees to test the ship, but concurs with all of Robin’s negative insights. "It’s a dog," she says, besides being tactically redundant. Meanwhile Mac and the exhausted admiral have fallen asleep on a park bench together, left alone by their affectionate crew.

The Best of Times

With Robin already despondent over Kara’s leaving, Colonel Henniker announces that he will break up all squadrons. Furious at the prospect of leaving his friends and his successes, Robin blasts off in Barbara’s fighter without protective clothing — Val rescues him by slaving his fighter to hers. Henniker is enraged, but Admiral Stettler admires the squadron’s success and loyalty. She rules that the Barbarians, including Robin, will be kept intact, autonomous from the squadron commander.

Henniker closes the wagering lounge and rounds up those still illegally gambling. Barbara restricts Robin, Mac, and her pilots for large areas of the ship, lest they be approached by gamblers. With the lounge closed Jeff is out of his chef’s job, so he and Kara return to Earth, even though she has finally understood the depths of his feelings for her. Robin no longer finds the ship to be a home.

On a day disrupted by repeated loss of artificial gravity, everybody finally casts a ballot. Richard’s candidate and Garvin’s candidate each lose to the third-party standard bearer, but Major Henniker wins in a landslide for the new squadron coordinator’s job. Mac is horrified.

Mac and Robin invite their fathers to visit and meet each other, but the dads are political operatives for opposing candidates. They drive everyone crazy with their constant arguing and can-you-top-this campaigning, until Major Henniker cancels their permits to campaign. Garvin and Richard unite their political pranks to disrupt Henniker’s campaign for squadron coordinator, having great fun and earning each other’s admiration.

Robin takes Kara to dinner determined to tell her about his deep feelings for her, but it becomes clear that she is deeply involved with Jeff, so the devastated Robin backs off. He and Mac receive another disappointment when martinet Major Henniker announces his campaign for the proposed post of squadron commander.

Unbeknownst to each other, the coughing Mac’s friends load him up with cold remedies for his date with Admiral Stettler. As she loudly proclaims her love, Mac collapses. Recovering back in his quarters Mac finds a note from the admiral, assuring him that she looks forward to their NEXT date.

The Way of Art

Robin gives Mac a graphic novel, "Where Do I Sign?," on the life of the first mentally-accelerated gorilla. Ishmael is an inquisitive, adventurous primate. He enthusiastically accepts acceleration on the part of all gorillas, but then is horrified to learn how humans have historically mistreated his species. Apes and humans alike create a cacophony of voices and opinions, so he retreats to his original home for the silence. There he realizes that history alone can judge his choice, but humans and gorillas are together for good.

Reg warns Robin that Robin’s classmate Kevin is about to be arrested for fixing combat rounds in war games, and making book on the results. Robin sneaks into the wagering lounge (off-limits for squadron personnel) to warn him, but Kevin is still caught. Before he is shipped back to Earth Kevin observes that Robin has always taken the long road — the way of hard work. Robin recognizes that the ship has become his home.

Robin takes Kara to a Virtual Reality movie, but fades away when Jeff and Kara start hitting it off. The movie tells the tale of the first creature accelerated in intelligence by the Benefactors. This is a dolphin who rejects the opportunity on behalf of his species, knowing that thereby he himself will forever be separated from dolphin and human alike. The next movie will tell the tale of the gorillas.

Mac recalls his first day on board, when he made friends with Reg, went to work for Barbara, and fell for Admiral Stettler. He resolved to make the Barbarians the best squadron on the ship, so that Admiral Stettler would have to notice him. Reg observes that Mac is in Grail Time — a time of pure emotion, living on impulse.

When Robin and Kevin exchange squadrons for the day, Robin is appalled by the slipshod maintenance of the Hardriders. He works hard all day single-handedly correcting months worth of neglect. The Hardriders hope to steal trade secrets, but Mac plants a video scrambler so that Robin’s work is not recorded. In the Barbarian hangar, he locks Kevin in a storeroom all day.

Schedules have finally cleared and coordinated well enough that Admiral Stettler accepts a date with Mac. Despite her best efforts, though, she is constantly interrupted and having to leave the restaurant. Mac is sorry but not upset. The minutes he spent with her that day were more than the minutes he spent the day before.

An obnoxious male fighter pilot disdains the Barbarians, then handily defeats Barbara in a one-on-one challenge of fighter rockets. It turns out that he’s her brother.

Major Henniker and his aide Rosco inspect the Barbarians’ hangar. They have the best performance records on the ship, but neither the pilots nor the mechanics meet Henniker’s martinet standards. As they leave, Mac uses an E.M.P. generator to wipe out Rosco’s computer record of the inspection.

End of the World

Robin reads of the aftermath of Earth’s devastation by alien attack. Peffard was trapped outside his small spacecraft, which was too badly damaged for re-entry to an Earth that for all the crew knew was now lifeless. As Peffard prayed, another ship appeared, but without signaling Peffard’s ship. As his crew prepared to attack and seize the stranger, Peffard interposed himself between the two vessels to protect the strangers from his own crew. His act of honor moved the Benefactors to judge humanity worthy, and intervene to save them.

TV loudmouth Russ Lipbalm rants that gorillas cannot be trusted; they’re in danger of reverting to animal savagery. At a conference for all squadrons, Mac and rival ape Wes Humbarger clear the room with a colossal brawl — not their first. Robin uncovers a friendly e-mail from Wes to Mac revealing that all their brawls are staged.

Kara is bored and resentful at her job in the ship’s library, supervised by Ms. Anne Thrope. When Robin sneaks science fiction titles onto the shelves, feeling the place needs some more imagination, Kara finds it delightfully subversive.

Admiral Stettler accepts a date with Mac just as Mac’s mother arrives for a visit. His mother’s hovering and Robin’s teasing only make Mac more nervous, and he’s sorely disappointed when the admiral has to cancel due to an emergency. Robin enthuses that this will give them a chance to see Mac’s baby pictures; then Robin’s own Mom unexpectedly arrives, gushing with embarrassing enthusiasm.

As Robin offers the ship’s library a collection of imaginative ficion, Mac suits up for a tethered E.V.A., listening to the call of the stars. When an alert sends the Barbarians scrambling out for war games, Mac’s tether tangles Barbara’s fighter, annoying her and terrifying him as she tears through the dogfight. Back at the hangar an uninformed Robin fumes that the librarian has no imagination. Mac, still recovering, observes that the librarian’s not a risk taker like Robin is.

Robin is enamored of the all-female Barbarian Squadron, all of whom are a decade or so older. He and Mac take a night off at a bar, where he hears Rodgers of Samurai Squadron speak demeaningly of the Barbarians. Robin fights him, but suffers badly — he’s been drinking excessively, while Rodgers is older and bigger. The Barbarians arrive and beat up the Samurais, then fawn over Robin who has suffered to defend their honor.

When Robin first reported on board, personnel officers tried to terrorize him with stories about Mac. Mac and Robin rig a booby trap in revenge, but Mac flees the attentions of the sadistic ship dentist. Robin escapes into the Wagering Lounge, confronting Kevin about hacking into Kevin’s squadron computers. Kevin gets slammed in the jaw in a melee, and has to submit to Dr. Savin. The personnel officers spring the booby trap.

Robin’s friend Kevin asks Robin to copy flight coordinating software, as he has accidentally deleted his own squadron’s files. Kevin’s Hardrider Squadron rapidly increases its score against Robin’s Barbarians in war games. Wagering on the games is a major activity, and Mac realizes that the Hardriders are reading the Barbarians’ in-flight computer linkup. He closes the linkup and changes the access code. Robin is devastated that he couldn’t trust an old friend, but Mac reminds him that Mac and Robin are two of a kind.