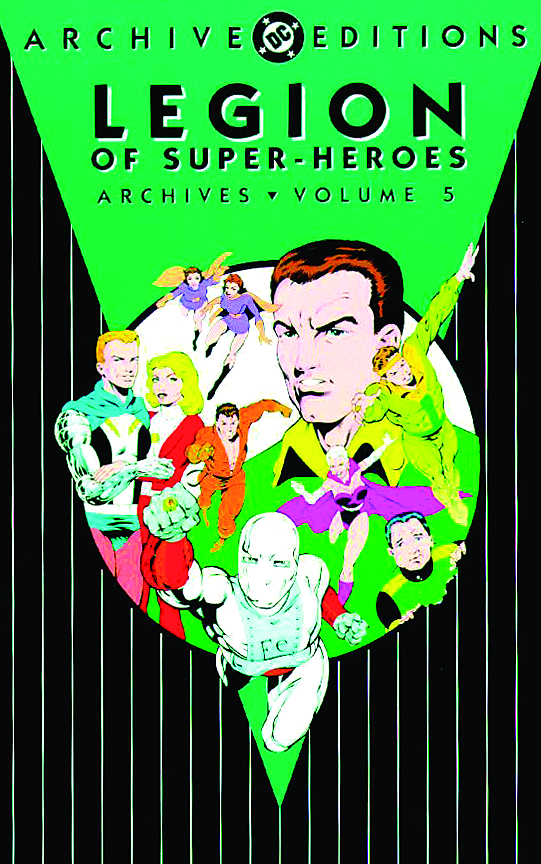 The Legion of Super-Heroes Archives: Volume 5 #5

One of the oldest and most beloved super-teams in comics, the Legion of Super-Heroes has a complex and long history. These deluxe hardcover editions reprint, in order, classic Legion appearances from the pages of Adventure Comics, Superboy, Action Comics, and Superman, from their first appearance in 1958, to their heyday in the Sixties. HC, 7×10, 224-256pg

Brainiac 5’s latest creation turns on its master and the rest of the Legion.

The Legionnaires go underground to regroup before taking on Computo after he kills one of Triplicate Girl’s bodies.

Part II: The Strategy of Brainiac 5!

The Legion eliminates the threat of Computo with anti-matter.

Part I: The Legionnaire Who Killed!

Star Boy kills in self-defense and is put on trial by the Legion.

Part II: The Verdict of the Legion!

Star Boy is voted out of the Legion on a 10-9 vote, and joins the Subs, who had just added Dream Girl to their ranks.

[Part I]: The Evil Hand of the Luck Lords!

The Legionnaires fear they are victims of bad luck.

Part II: The Secret of the Luck Lords!

Saturn Girl travels to Thaun to consult with the Luck Lords about the Legion’s bad luck, and the Legion follows her and discovers the truth.

[Part I]: The Super-Stalag of Space!

A team of Legionnaires attempts to free Brainiac 5 from a prisoner of war camp and end up prisoners themselves.

Part II: The Test of Brainiac 5!

Several prisoners mount escape attempts, but their failures point to a spy in their midst.

Part I: The Execution of Matter-Eater Lad!

Weight Wizard is exposed as the spy.

The girls mount a jailbreak, but Matter-Eater Lad is caught and about to be executed when Superboy, Mon-El, and Ultra Boy save the day.

Four new members are admitted into the Legion.

Part II: Invasion from the Edge of Space!

While the Legion defends against an invasion from Khund, Phantom Girl and Cosmic Boy begin to suspect that Karate Kid may not be what he seems.

[Part I]: The Traitor’s Triumph!

The Legion continues to try to defend the Earth from invasion, but it appears Karate Kid has sabotaged their efforts.

Part II: The Legion and the Warlords!

Nemesis Kid reveals himself as the traitor as the Khunds invade, but the Legionnaires repel the attack and Nemesis Kid escapes.

Target– 21 Legionnaires! Part 1: And Then There Were None!

After Invisible Kid is elected new Legion leader, the Legion performs at a charity benefit where Sun Boy is hurt and loses his memory. But it may not be an accident, but rather the work of Dr. Regulus, who has taken Legion headquarters right out of the ground.

The Legionnaires trace their purloined headquarters to Dr. Regulus’ spaceship, but it takes Sun Boy to bring him down.

[Part I]: The Rogue Legionnaire!

Universo steals a time bubble, and the Legionnaires use a student’s time cube to travel to the past in search of him.

Part II: Ambushed Across the Ages!

Rond Vidar returns the Legionnaires to their own time and they stop Universo from taking hypnotic control of the United Planets Inner Council.